BLUE REFLECTION: Second Light was created by Gust Co. Ltd. developed and published by KOEI TECMO. You also only play as a high school girl.

BLUE REFLECTION: Second light – play Ao Hoshizaki, a high school girl who wakes up in a school surrounded by an endless ocean. There are three other students at this school: Kokoro, Yuki and Rena, who have been in this new world for three days and have all lost their memories – without knowing why or how they ended up there. Each of these students woke up with a mysterious ring on their finger, and these rings give them the power to fight with reflector weapons, weapons that are summoned based on the emotions and feelings of these characters. These are the weapons that you will use in fighting demons. Oh, did I forget to mention that these high school girls fight demons? Yes, they encounter them when looking for their memories found in mysterious worlds called Heartscapes that appear when certain events are triggered.

Uncovering memories will unlock new characters. They are displayed as soon as certain memories containing them are discovered. Like the girls you start the game with, they too will have no memory of what happened and the hunt for their memories will begin too! I found the concept and story to be a super interesting premise, and I was very interested in uncovering the lost memories of all the girls stuck in this strange world. 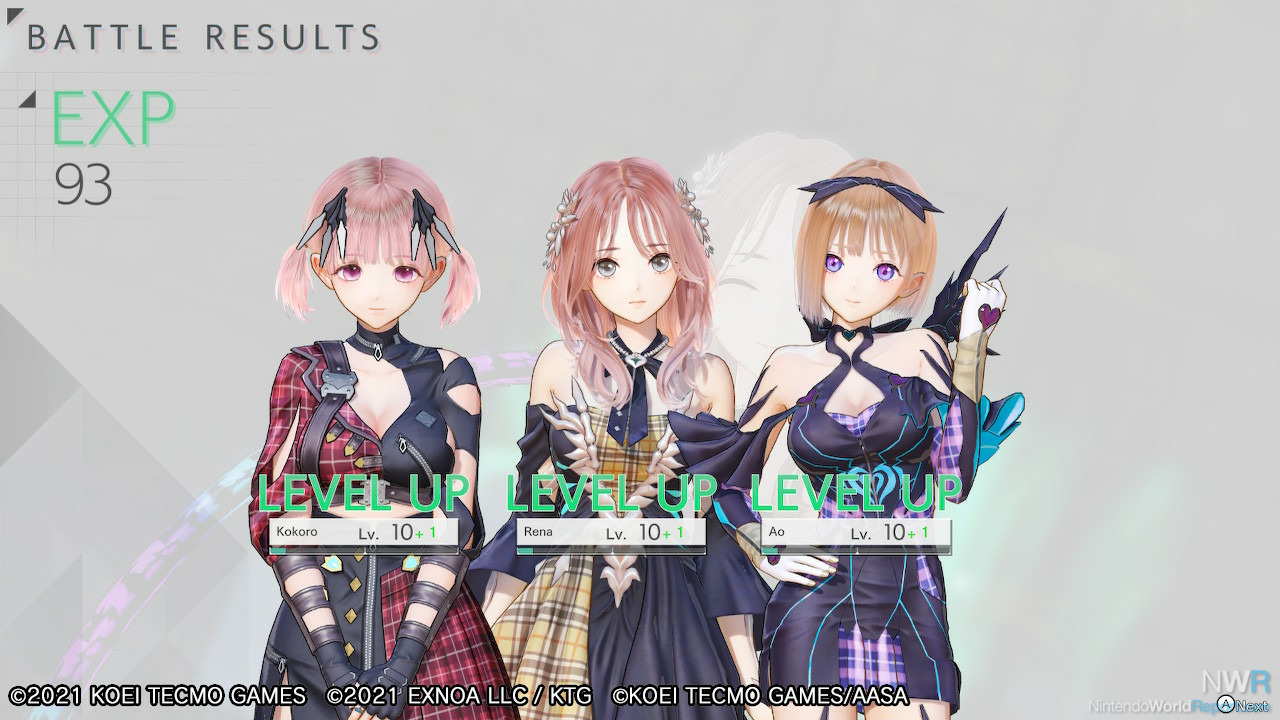 Second Light is a sequel to BLUE REFLECTION; However, you don’t have to have played the previous game as there are no recurring characters and the story is on its own. The core gameplay is like the previous title, but one area that they’ve massively updated is the combat system. In the first game, the combat system was turn-based and had numerous steps to use your skills, attack enemies and monitor charges, among other things. It all looked a bit complicated and chaotic. In Second Light, the developers seem to have made the system a lot more accessible to newbies to this type of game, and the in-game tutorials are easy to follow to ensure you’re getting the most out of this redesigned system.

The combat system works on a timeline in which your group members progress at different speeds depending on their statistics. You and your allies are on one side and the enemy on the other. When your character reaches a certain level in the timeline, they can then act and use a skill. Skills use Ether, and each level on the timeline is 1000 Ether, so the amount of Ether required for a skill determines how far into the timeline you have to go before you can trade. The more ether required, the better the ability. Finding a balance between the cheaper and more expensive skills is important as you don’t want to wait too long as this will allow the enemy to act faster. I really enjoyed the design and layout and having to strategize in real time to decide when to use certain skills. This system shone in boss fights as the timing of these ethereal-intensive moves was critical to success – as opposed to the basic encounters where you could simply spam the first level skills and win with ease.

Every time you successfully use skills in a single battle, you increase your equipment level. When this equipment level reaches the desired level, your character will transform into a reflector. This is almost like advancing your character where you have more powerful skills, a costume change and increased stats. Your equipment level is reset after every battle. This was a nice addition to the combat mechanics, and it adds another layer to those tougher boss fights, especially when things may not be going the way you want. Your characters will also level up by gaining experience points in every fight, so don’t skip too many of these standard games as they will come back to chase you! 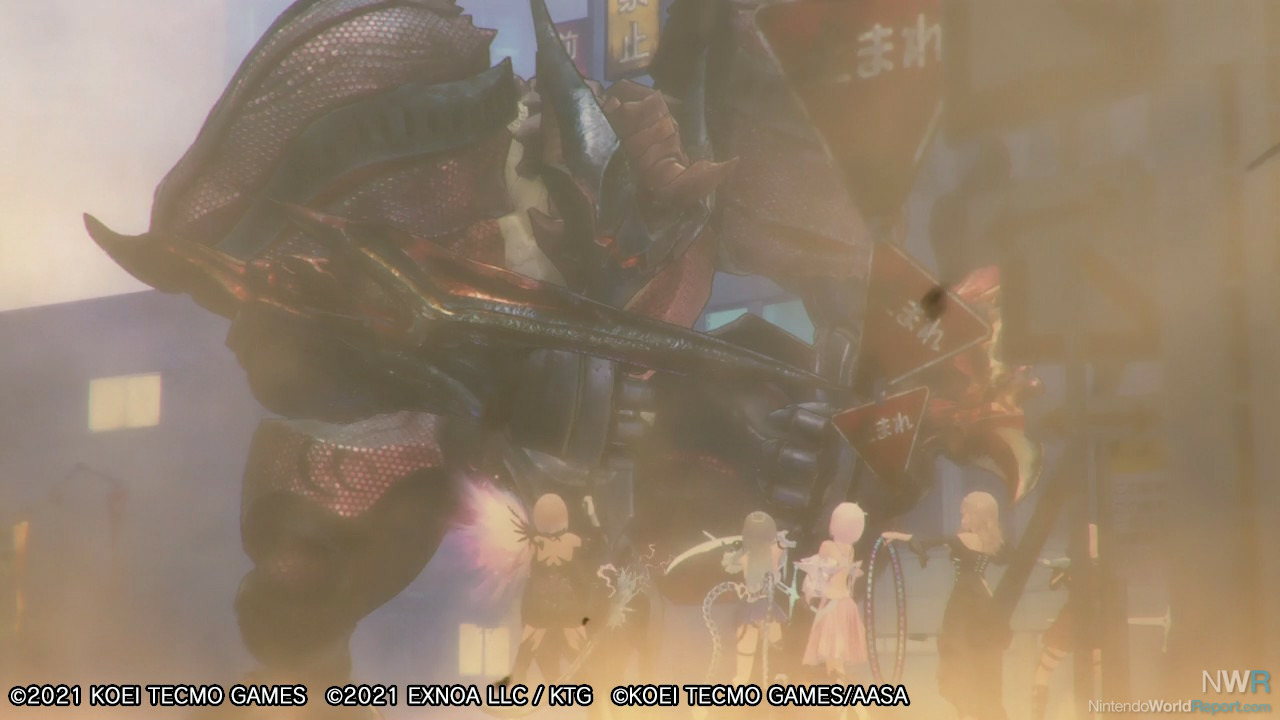 Aside from the main story where you fight demons in the Heartscapes and look for your memories, there is plenty to do at school to keep you occupied. The first thing you can do is get to know the other girls better. This can be done simply by chatting with them, messaging through your FreeSpace app, meeting – purely platonic – and fulfilling requests. When you go out on a date with one of the other girls, stroll around the school and as you reach certain interesting locations, unique cutscenes and conversations are unlocked. These strengthen your bonds and earn the talent points involved (more on this shortly). It’s important to point out that every line of dialogue is fully voice-controlled – in Japanese, of course – so you’ll still have to read something if you don’t speak that language, but voice control is always welcome in any case.

Fulfilling requests is also a great way to learn more about the girls as their requests are usually based on their interests. For example, many of Yuki’s requests are based on collecting food for cooking. By fulfilling requests, you receive talent points that characters can use to improve their stats over the long term. This would include increasing their defense, health, or natural speed on the timeline in battles, among other things. The inquiries are a welcome change from the heartscapes and fights that can quickly repeat themselves. All of the characters are personable across the board, each with their own quirks, so it was great to get to know them all on a deeper level. This was especially true when their memories were slowly returning as certain personality traits they displayed made more sense. 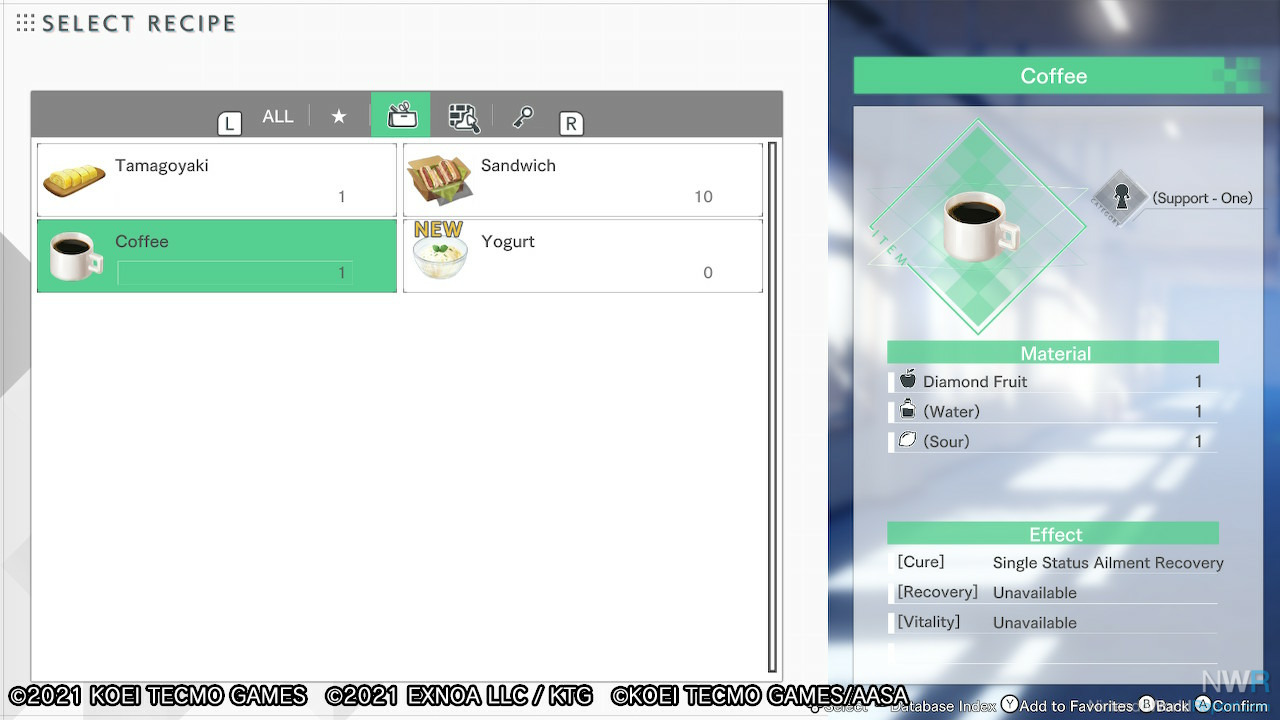 Once inside Heartscapes there are plenty of items and resources to take with you as you explore. These can vary from fabrics and food ingredients to wood and other natural materials. These items are used in some requests, but the bulk of them are used in crafting and construction. The manufacturing and construction mechanics are simple: you can only make things the girls remember making, so more will unlock as the game progresses. The crafting and construction ability can be accessed from a quick menu anywhere in the school area. The most common item you are likely to be making is food. These can be brought into the Heartscapes and are usually your way of restoring health outside of abilities. The construction of new areas and facilities around the school offers those who benefit from the new structures permanent increases in value, such as study tables, a small beach, minibars, etc. These two functions are also welcome additions and increase the depth of the game as well as further insights into the characters around you to find out what they like, what to remember and how to connect with their life before they end up here.

BLUE REFLECTION is a very nice game. The use of colors and light is bold and compliments the typical anime-style JRPG graphics. There’s an internal clock in the game so you can watch the sun go down and up sometimes, and those sunsets are beautiful! The graphics are great in fast-paced fights, but when too many things are happening at the same time, I’ve noticed slight lag or stuttering in some of the characters’ actions, almost like the game is trying to catch up or skip frames to do so. This wasn’t a huge problem at all and was rare, but it’s worth noting nonetheless. I also feel that some of the stuttering was implemented on purpose. Early on you get a boost to reach a high edge, on the frame where Ao is fully stretched and her skirt hides nothing, the game pauses for a moment, then it continues. I found that strange, but every time she ever needed a boost in the future, the same delay happened at that precise moment. A bit of fan service I guess (not that this game needs any more!). 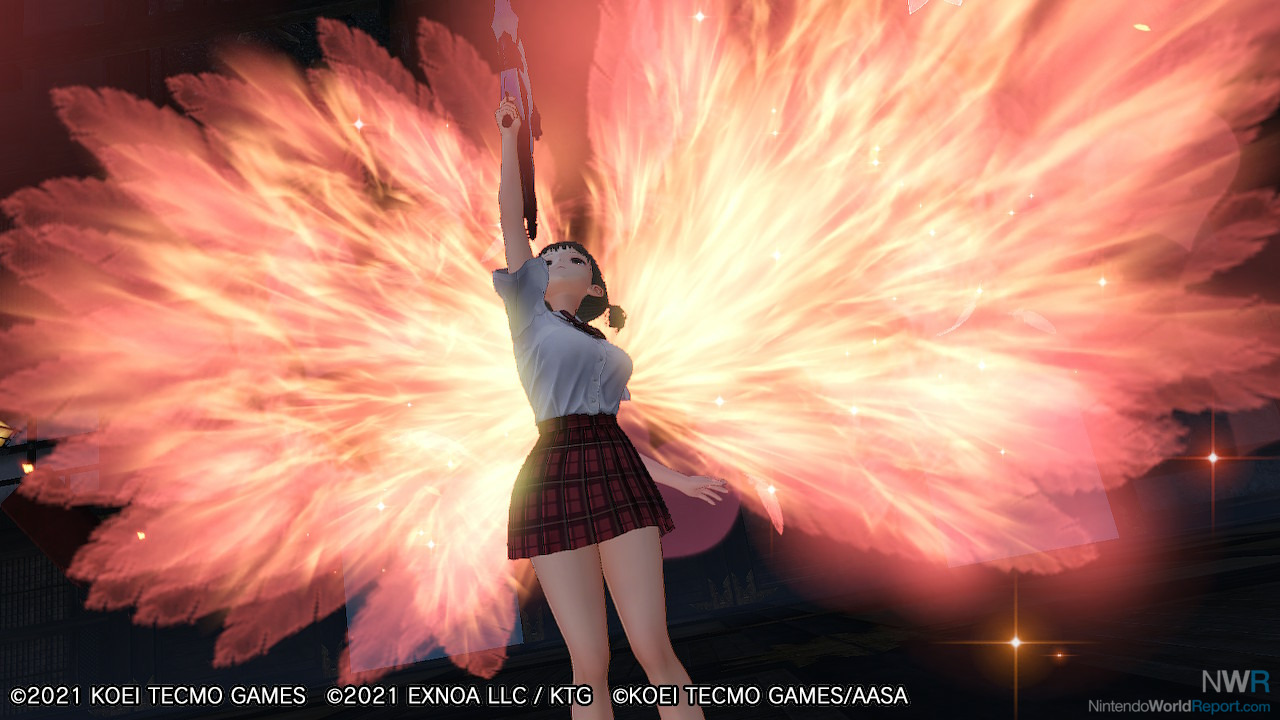 While the graphics were stunning at times and the settings were well built, there were a few minor performance issues. First, it takes a long time for the game to reach the home screen, which I found frustrating every time I booted up. Also, in any setting, random objects would appear blurred in the background and then jump into detail when you are close enough. Fortunately, it didn’t affect my experience too much as these items were still identifiable and the overall art style was bold and charming.

If you’re like me and love customization and the ability to switch outfits, BLUE REFLECTION has that in abundance. Each character has alternate uniforms that they can switch to once you’ve unlocked the dressing area. At first these are simple, usually just going from a school blazer to no blazer, but some characters have the option to completely change their outfit. Ao, the main character starts out with a handful of options, half of which are swimsuits. There are also confirmations for many, many more outfits that will appear as paid DLC when the game launches, as well as future updates slated for the New Year, including photo mode, additional difficulty levels, and more swimsuits!

BLUE REFLECTION: Second Light is a surprisingly profound JRPG, both in terms of mechanics and in terms of story, without overwhelming the player in either area. The characters are all unique and personable, and in addition to the interesting story, the connectedness you gain with the cast will help you find answers. The combat system is fun and boss fights are especially tense. Despite the repetition of some enemies and the overuse of cutscenes, this is a great game that I’ll be diving back into the confirmed higher difficulty level later this year.