These days, you never really know what you’ll get with superhero games. Rocksteady’s Batman: Arkham series and the newer Marvel Spider-Man are proof that famous comic book faces can set the standard for the industry, but then we all remember how Marvel’s Avengers went. Unsurprisingly, Marvel’s Guardians of the Galaxy – Square Enix’s second attempt at adapting the superhero formula is a cause for concern. Fortunately, however, these concerns became misplaced.

Marvel’s Guardians of the Galaxy is an incredibly entertaining and very funny title. Driven by the amusing, exaggerated vibes of the two large-screen films, it tells an original story that enthusiasts will love and newcomers can easily follow. With endlessly fun battles and wonderful characters, the game is much more Marvel’s Spider-Man than Marvel’s Avengers. While it’s not without its flaws, developer Eidos Montreal has a winner in hand; one that deserves a sequel or two. 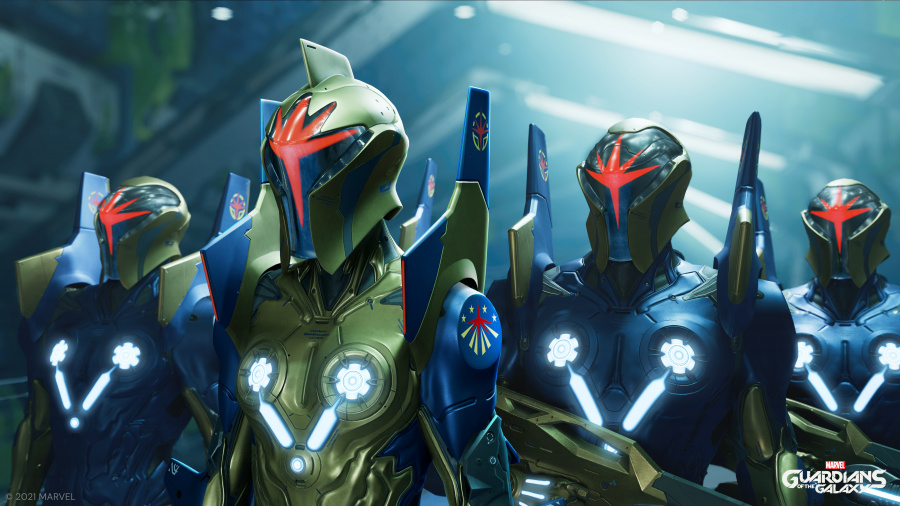 12 years after the Chitauri tore the universe apart in the Galactic War, Star-Lord and his charismatic crew members take odd jobs to pay the bills. They are taken to the quarantine zone, which is ruled by the Nova Corps and which is fined if caught. Of course, that is exactly what happens to those on board the Milano. The team is gathering just enough galactic units to pay off its debt when it discovers another threat to the galaxy after returning to Nova Corps headquarters.

It’s a compelling storyline that will keep you entertained from start to finish, but what you’re really here for is the characters – and boy, they deliver it. The five bandits of Star-Lord, Drax, Gamora, Rocket and Groot don’t suffer quite the same fate as the Avengers; they all resemble, for the most part, their on-screen displays. Star-Lord is obviously the weird one – maybe it costs too much to scan Mario’s new voice – but he makes up for it with the usual charming, center stage act.

In fact, all of the five Guardians’ performances are top notch. Brandon Paul Eells returns as Drax after voicing him on Guardians of the Galaxy: The TellTale Series, and again does a wonderful job of capturing the overly serious but also hilarious tone of the Kylosian. Kimberley-Sue Murray beautifully portrays both the deadly assassin and the gentler sides of Gamora’s personality, while the ever-lovable Groot is his sweet self in the hands of Adam Harrington. The cutscenes aren’t nearly the same budget as a real Marvel movie, but the characters you have come to know and love are very present. You will only ever control Star-Lord directly, but dialogue options and decision-making make you the true leader of the Guardians. Conversations with teammates allow you to explore their backstories during downtime between chapters, while solutions to key story moments can be dictated by your hands. This isn’t a TellTale-style approach where certain choices can lead to dramatically different endings. However, it’s a welcoming extra layer that adds a little more depth to the narrative as it keeps track of which of your decisions are saved for later when the effects of your actions are felt.

The storyline, characters, and decision-making all flow into a surprisingly rich, 20-hour campaign that explores the galaxy and more. Combat is a large part of the experience, but there is also time for environmental puzzles and exploration. Divided into 16 chapters, you can leave the main path for collectibles and outfits inspired by comics of the past, or take the time to explore some of the larger areas. Think Carson V from Ratchet & Clank: Rift Apart and you are on the right track. Don’t get us wrong, the game is largely a linear endeavor, but there is certainly room for some fun on the side.

So the fight is your meat and your potatoes, with Star-Lord armed with his trusty blasters. You might think Marvel’s Guardians of the Galaxy is a third-person shooter based on it, but treat the game like your playtime is growing exponentially. You see, while Peter Quill’s weapons can deal with simple enemies, they are borderline useless against tougher enemies on their own. This is where the other guards come in; They can activate their skills based on individual cooldown meters. Each equipped with four powers, unlocked through story progression and purchased through upgrade points, they all help in different situations. 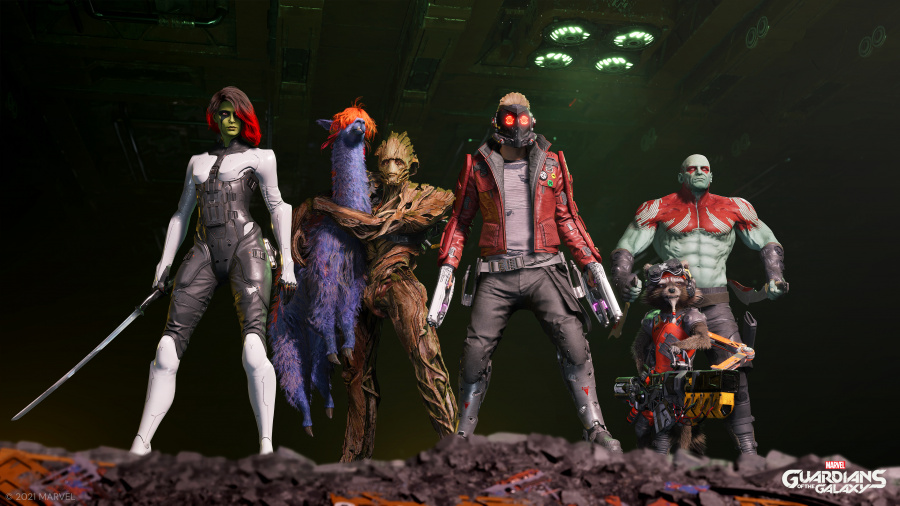 More imposing fighters have a staggering gauge that makes them immobile and prone to additional damage once filled, and Drax is perfect for that. Gamora can then either take a good chunk of HP from a single health bar or quickly deal damage to multiple enemies at once. Rocket pulls out the heavy weapons and explosives, while Groot is about crowd control and healing teammates.

At the peak, 20 different skills can be selected, which may seem like a lot. And it is, but the game pads them smart enough that you never feel overwhelmed by the possibilities that are available to you. In fact, the game turns that prospect on its head: there are so many skills to choose from that you’ll want to get caught up in difficult scenarios to take advantage of what each individual Guardian has to offer.

Combined with Star-Lord’s standard blasters, the wide range of skills help refine the battle with different approaches in dealing with the toughest villains in the galaxy. You can focus on the staggering display, sit back and let Rocket play with his toys, or let Gamora go into town. 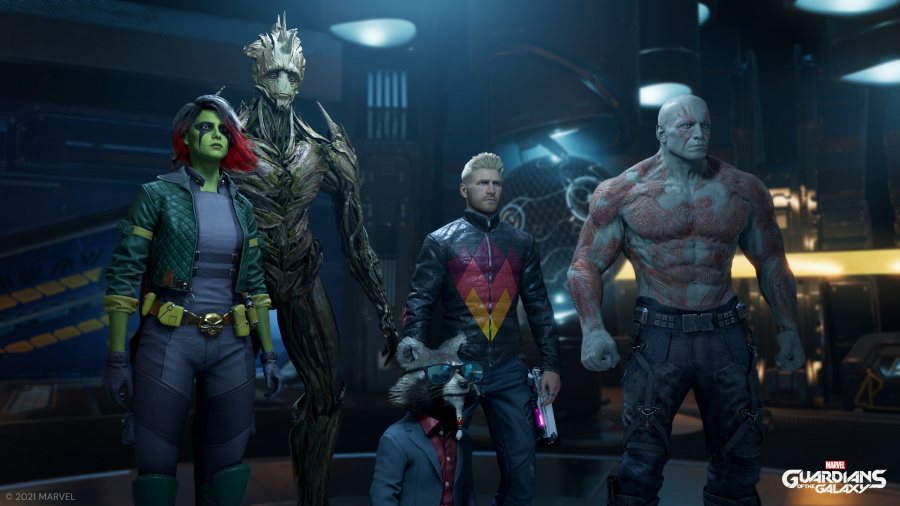 However, if you run into trouble, the huddle up mechanic is your rescue. Once activated in the middle of battle, Star-Lord brings the Guardians together for an encouraging conversation that, if successful, will encourage the team and increase the damage done for a limited time. These sequences can be a little too long, especially in the second half of the game, but the classic 1980s track that continues them is always worth it. Still a fun feature.

Our only real gripe during the fight would be the repeated dialogues that take away some of the charm of the lines themselves. In a single encounter, the Guardians can repeat themselves twice or even three times. A roaring war cry from Drax doesn’t quite have the same effect if you’ve heard the same one just 30 seconds before.

All in all, however, these are fantastic foundations for a great title in the present and whatever may come in the future. Star-Lord is just enough combat veteran to deal with forage enemies on his own, but the variety of skills that the entire Guardian squad possesses really comes into play the more you play. Incessantly entertaining and entertaining, Marvel’s Guardians of the Galaxy gets its key mechanics just right. 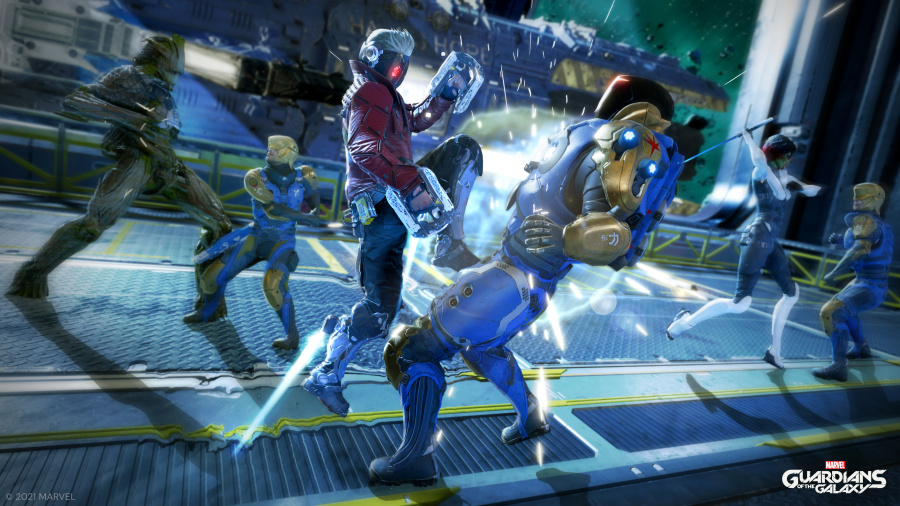 What’s also on point is the soundtrack; A long list of hits from the 1980s accompanies original tracks for an unforgettable listening experience. The new songs tend towards heavy metal and are used quite often in normal combat encounters. The tracks you already know and may love are saved for the huddle ups above and as the story climbs, or you can choose from the full list back at the Milano as you wish. There’s no better feeling than working your way through a stream of bad guys just for Rick Astleys Never Gonna Give You Up to get going.

But then there’s nothing worse than dropping the game, which happened all too often during our playthrough. Characters would lose body parts during the cutscenes, objects would slip out of the environment and objects would no longer be able to interact. Characters would seemingly forget who they’re with, which means we couldn’t access workbenches to buy upgrades. And large parts of the scenery would be missing before they suddenly snap into place. Reloading a checkpoint usually fixes the problem, but it happened so often that we started with the errors so we wouldn’t lose progress all the time.

All of these issues occurred before a day-one patch was available, which went live late during our review process. We started the buggy section of the game and went through it twice to see if much had changed with the update; We are happy to inform you that apart from one there have been no malfunctions. A birthday cake had doubled. While we cannot guarantee that your own playthrough will not go without technical errors here and there, it does seem that the first patch made this side of the title a lot better. 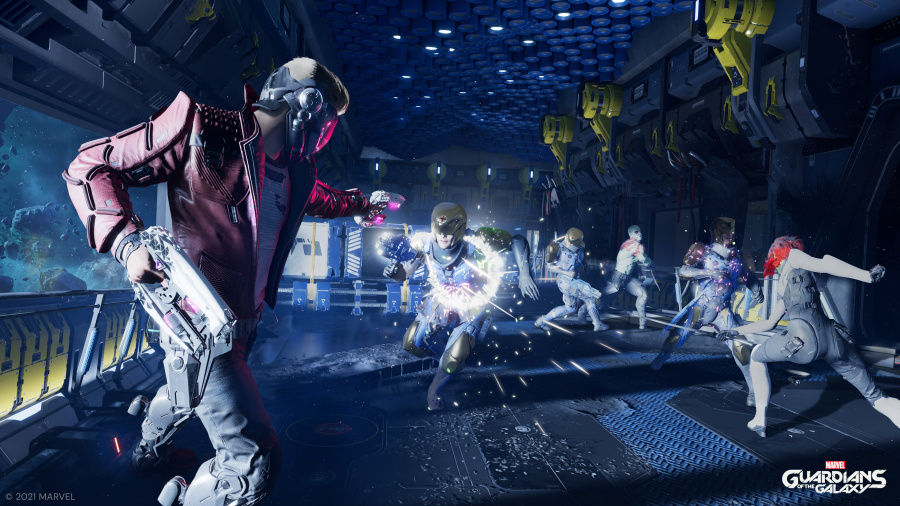 A ray tracing mode will also be added to the game in a post-launch update to complement the standard quality and performance modes. The quality mode aims at 30 frames per second and increases the visual quality significantly, while the performance mode doubles the frame rate but degrades the graphics. This is actually a bit of an annoying situation because the title really looks like Yes, really Good in quality mode, but you don’t want to play such action-packed games at 30 frames per second. Performance mode smooths out the gameplay, but then the graphics aren’t nearly as good. Sure, passable, but always in the back of your mind you will know that the game can look a lot better. You can’t have the best of both worlds here.