Greetings and be well met, good Sir Knight. Put on your plate armor, put on your helmet and pick up your … weapon? Wait no sword? Well that’s a bit different, and so are the creatures you encounter and have to destroy them in order to save the kingdom.

Knights & Guns is a 2D action game in which you run back and forth and shoot the invading monsters. The twist here is that you can only shoot straight up. The monsters soar and bounce over your head so you’ll have to work on your timing to meet them. 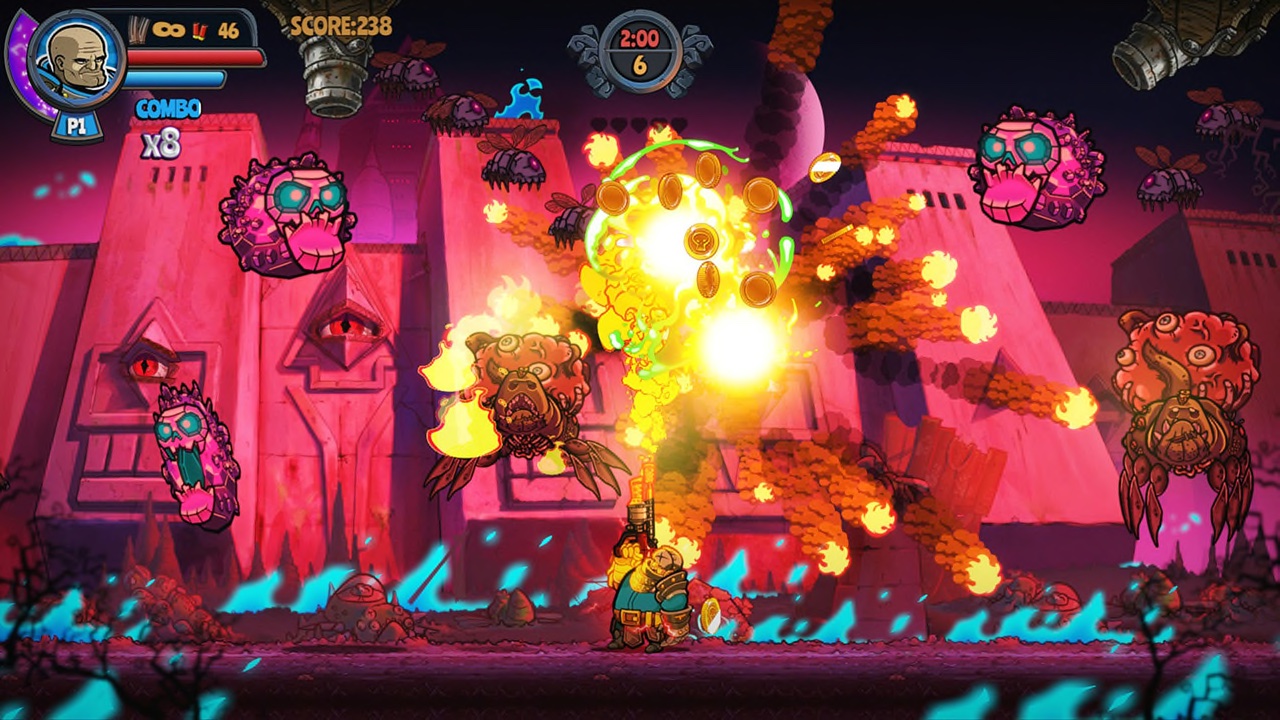 The basic premise of the story goes like this; You are a knight and an invading army of monsters is destroying the kingdom. You will have to use a new weapon called “pistol” to kill the monsters and save the kingdom. An added challenge is that the leader of your order of knights has been corrupted and you will have to deal with it later.

At the start of each level, you can choose to accept the standard weapon that you get, or you can spend some of your hard-earned coins to buy another weapon. Each level consists of a single screen that you can walk left or right on. Sometimes you get platforms to jump on, which has its own advantages and disadvantages. As the monsters hop over you, the head is closer to danger on a platform, but you can dodge ground-bound monsters or collect some coins that landed on the platform. Killing a monster will give you coins, but you will have to go to the coin to actually collect it. 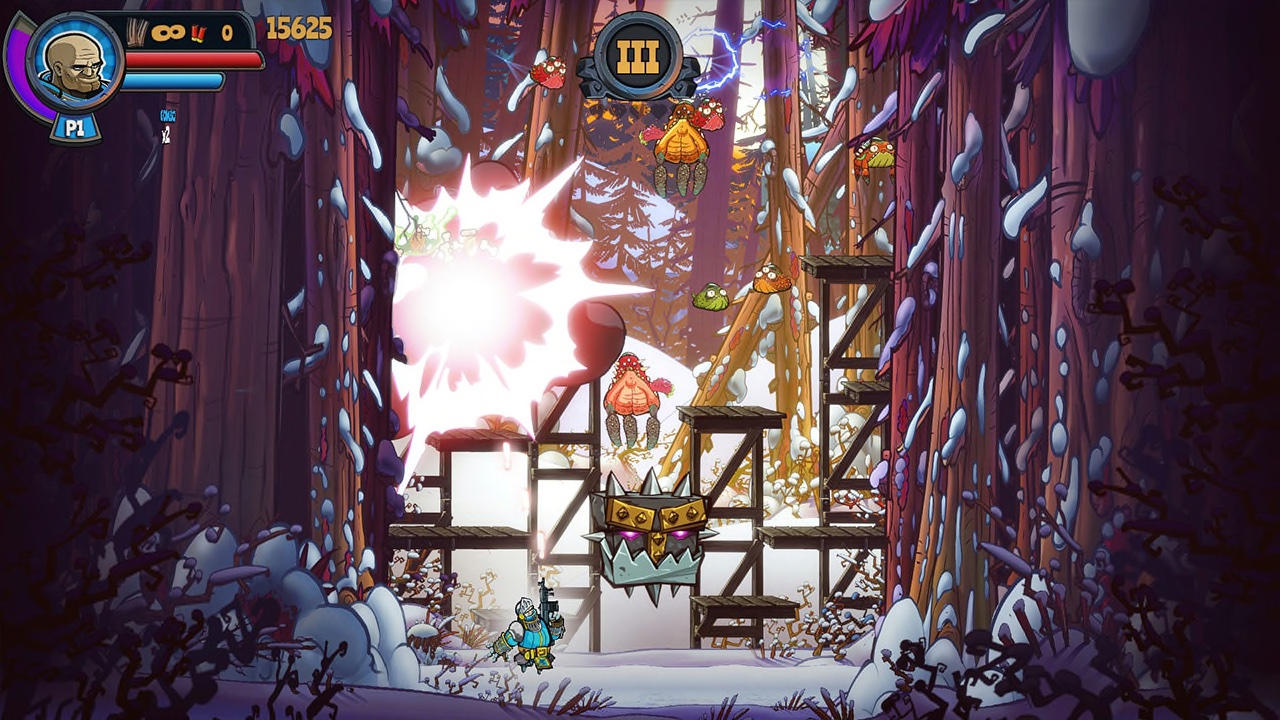 Your attacks include a standard shot from your weapon or a special attack that hits everything on the screen. If the monsters are weak, this can destroy everything on the screen (but don’t count on it …). The left Joy-Con stick moves you left and right, the A button shoots, the Y button is your special attack, the B button loads (runs) and the R button jumps. There aren’t many controls, and they are all worth familiarizing yourself with. The charging function is handy because you can destroy monsters on the ground without taking any damage. The downside is that you won’t earn coins this way.

The game lays out the levels as squares on a map grid. You can access a new grid / level by either shopping in with coins or by clearing the previous level. You also have the option to choose which direction you want to go on the grid – it’s not just a single path. You have unlimited ammo when you play a level, but there are two things to keep in mind: your rate of fire is not that high (even with the machine gun) and you need to take your time reloading. The reload time depends on the weapon – a shotgun will stop for a moment between each shot, the pistols and automatic rifle must be reloaded between clips. There are other fun weapons out there, but they become available as you progress through the levels (and have enough coins to buy them). 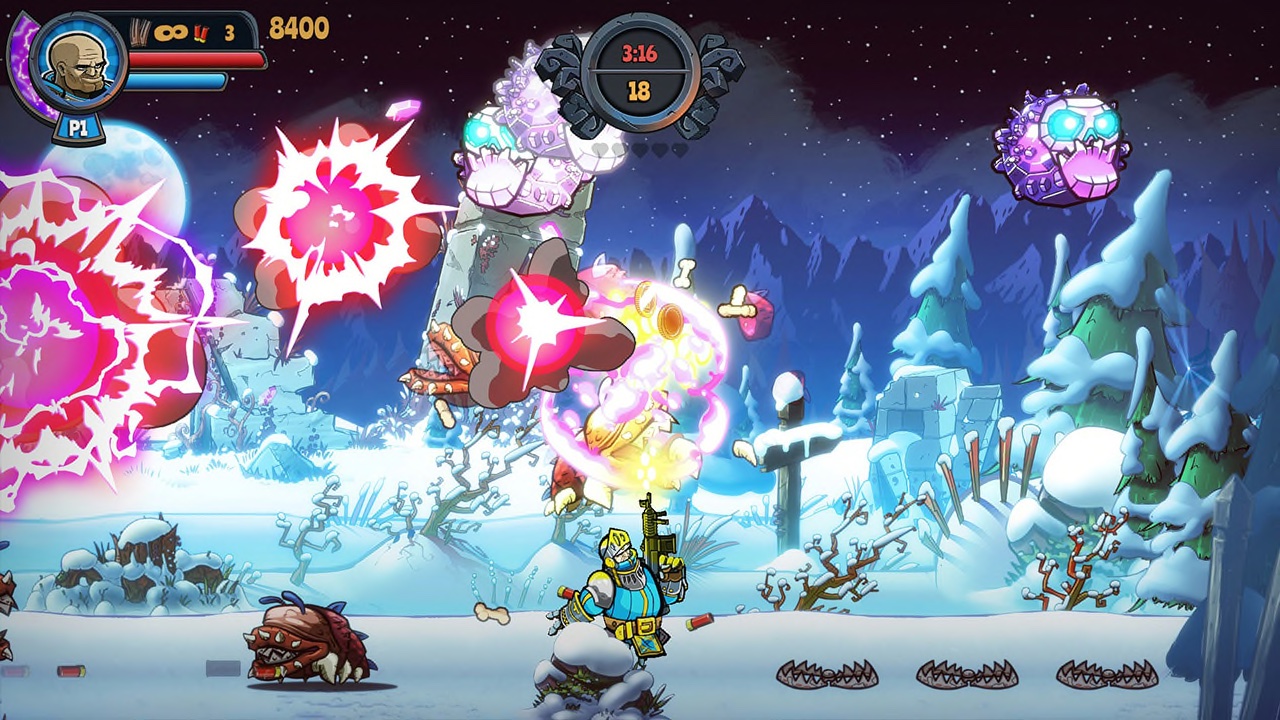 This is a minor pain point. Some levels require you to buy your upgraded weapon every time you play the round. This is not a situation where once you buy a feature it is yours for the rest of the game, which is a bit unfortunate. There is a recharge time when it comes to your special attack, so be careful where you use it.

Speaking of the game economy, there is a store that sells things like books, armor, power potions, and extra life / health. Be careful how you spend your coins; the extra lives are helpful but expensive, and the game has no forgiveness when you run out of lives and have to grind your way through some lower levels to earn more coins. Some of the “upgrades” are cosmetic and should probably only be distributed as you progress, but there you are.

The game is pretty solid in terms of looks and sound. One point of criticism is that the health bar is a percentage that is displayed in the top left of the screen. The number is quite small, and it does take some attention to focus on what distracts you from the action. When your hit points get very low, you get a red haze around the edges of the screen. This reminds me that killing a creature at random points in a round can drop a first aid kit. It only restores a certain percentage of health; it is not necessarily an instant 100% recovery.

All of this is well and good, but there is one more feature that will make this game a little more fun for you – there is a two player mode. Yes, you and a friend can team up to blast villains into oblivion. Of course, this means the game will throw more bad guys at you, but that makes it a challenge. 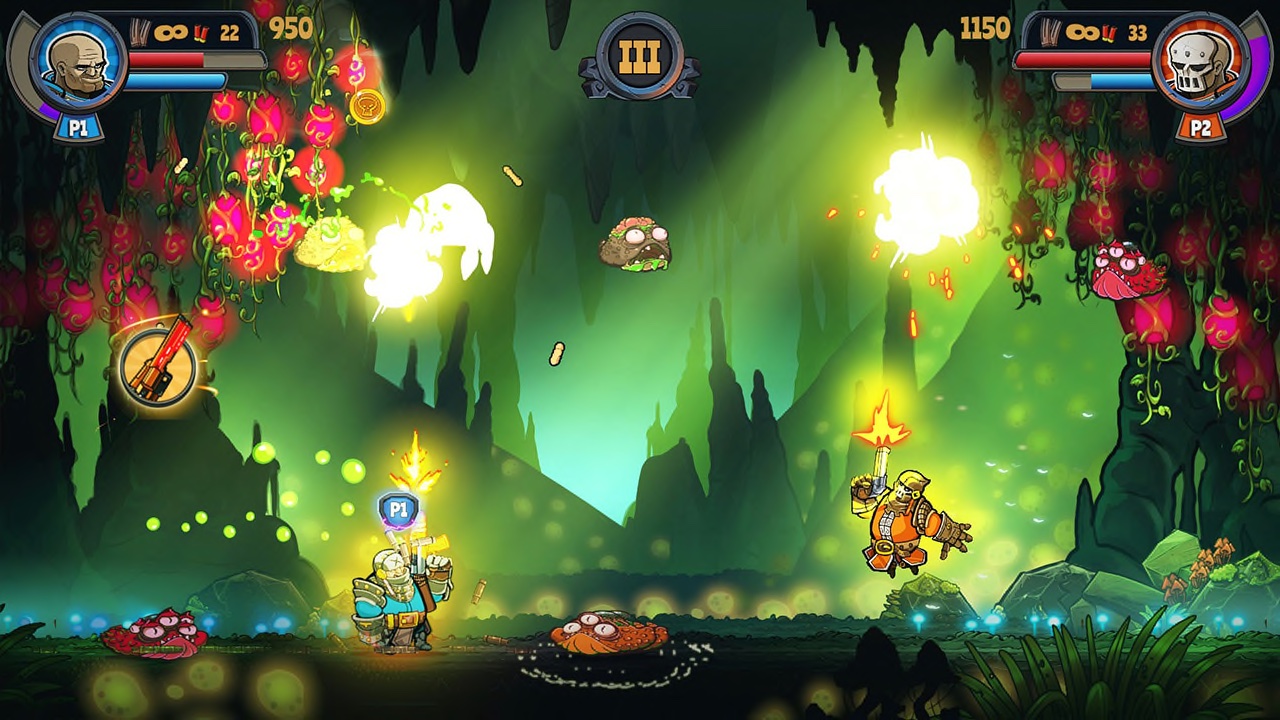 All in all, Knights & Guns has a number of advantages and disadvantages. The game looks nice and the sound effects are fine, but the story is predictable and the voice acting is a bit cheesy (not in a good way … sorry guys). You get tons of levels and a choice between campaign and endless modes, but the rewards aren’t always enough to keep up with the upgrades. Walking around while just shooting up is relatively straightforward, but the small print indicators on your stats are a distraction that can kill you if you’re actually trying to read them. There is good playability, but the game could use some refinement.