Suitable for my descent into madness.

Astria Ascending received a lot of pre-release attention for its development and art teams who claimed to be represented by veterans from Bravely Default, Final Fantasy (which were not specified) and Nier Automata. And to my disappointment, it turned out not to do justice to the pedigree; it may appeal to completers, but I can’t remember the last game that I actively tried not to play. 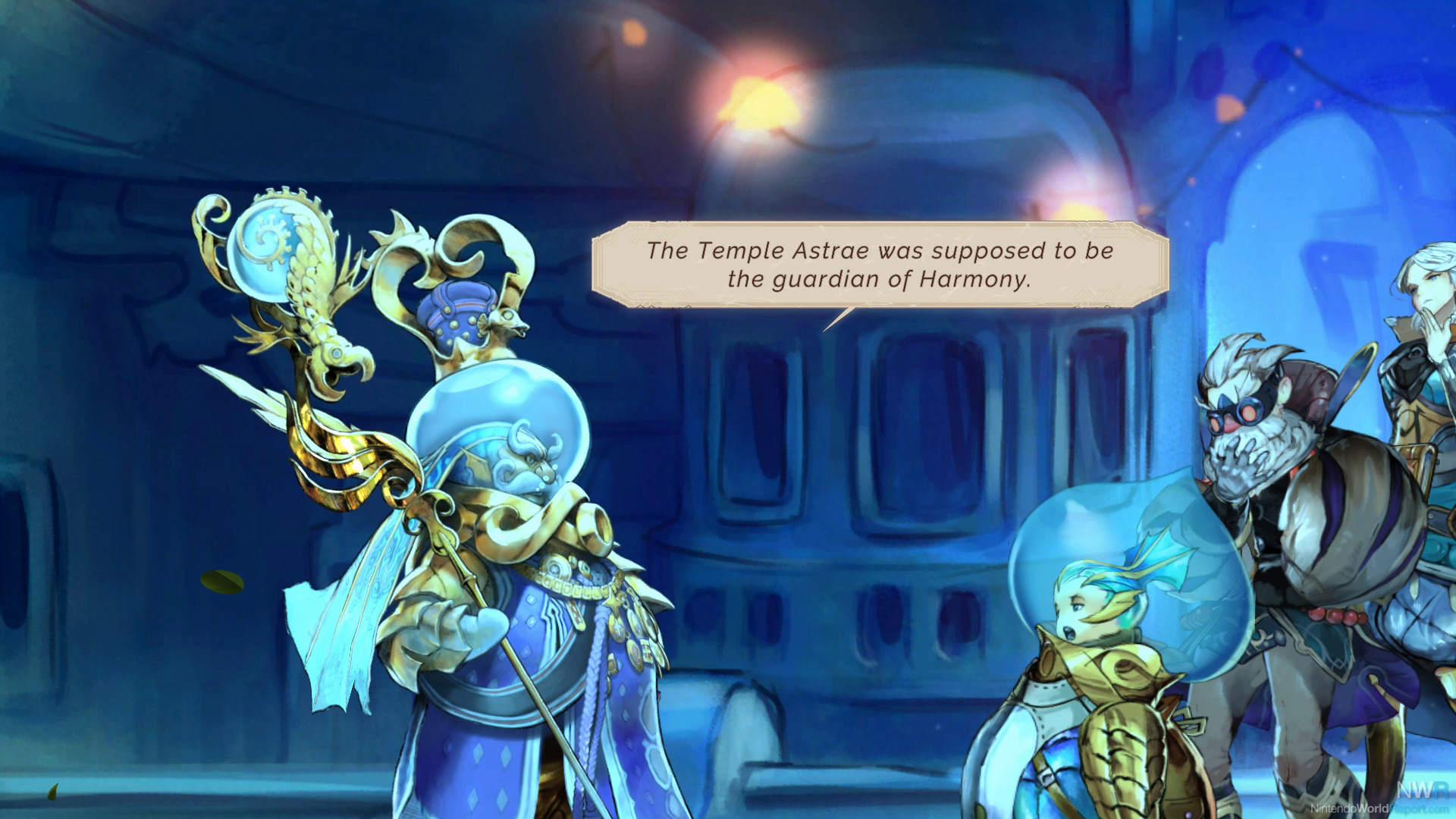 Your drinking game word of the day: “Harmony”.

The world of Astria Ascending is a world in which every three years for a millennium a group of people become “demigods” or temporarily immortal beings who serve to keep the world in harmony; after a three-year term they die. In the case of Astria Ascending, the entire group of eight will be dumped on you right at the start of the game with no backstory and asked to protect the land of Orcanon. While elements of their background become clear as the story progresses, there’s a reason most parties build from something small rather than throwing each character at you at once. I would have to start the game to give you one of their names; In the end, I only imagined them as professional classes a la Final Fantasy V. The group leader is a knight while other classes present include: thief, multiple magicians, conjurer, magical swordsman, and what equates to a freelancer. There was a way to skip cutscenes, and in hindsight I probably should have made more use of it.

Orcanon is explored in a 2D perspective with basic controls such as jumping and elementary manipulation through unlockable rings. The enemies are in the area and it is possible to stun them (the first ring force does this) either as a method of avoidance or as a preparation for a fight when ready. Combat itself is turn-based, with the order of movement determined by speed statistics, but both the enemies and your party will ultimately have skills that can change the order of their turn or even prevent the enemies from moving entirely. One particularly irritating sequence about halfway through play was that one of the area’s enemies had an “omni-stun” attack; “Omni” is the game’s term for multi-targeting moves. At this point in the game, the only character I could afford stun protection was the group’s healer, who had the “Heal All Statuses” skill. And he was kidnapped, so from the party. And part of the chase was chasing the thief in a series of pots where wrong guessing meant encountering a “surprise attack” with a series of enemies where I had exactly one party member who was ahead of his second Train could move. After missing and being stunned to death for the sixth time, I nearly broke my Switch in half. Researching dungeons is difficult because hit points regenerate at the end of the fight while magic / skill points do not. There’s a storyline apology for that, but making random encounters more difficult to get the player to purchase magically restoring items will not be appreciated.

The characters have their basic job and can use skill points to unlock additional creation sets up to a “tertiary” job. The “Skill Points” earned can also unlock stat boosts, but these also require an item called a “Stat Orb” to fully unlock. And if you use a steal technique to fight a boss, those stat bullets can be stolen from you in the middle of battle without recourse (aside from being really lucky with your own thief in a counter-steal). For reasons I have almost no question to ask, experience in this game has a theoretical maximum of less than a trillion points; If you want to see numbers increasing, Astria Ascending is for you. Group members can collect experience and skill points in the view, with the option of lowering them if desired or looking for a challenge. The default is 100% so maybe don’t change the option, and it doesn’t apply if someone is not in the group e.g. B. if the healer has been kidnapped.

A lot of attention was paid to the graphics of Astria Ascending Pre-Launch, and the opportunity to try the game on the Switch OLED made it look even better. There are small details that were lost in handheld mode on a 2nd rev switch which made the larger screen size apparent, such as: The backgrounds are beautiful too and some of the later fighting techniques look cool too. The cost is to load: there is around 30 seconds of initial loading even when playing while docked, and a 10-15 second delay between entering a new area and being able to move. There also seemed to be some menu delay, especially when shopping: I pressed B to switch from buy to sell and it took a few seconds before I hit B again and the transaction completely ended. I also had a lock but couldn’t restore it; there’s a somewhat generous autosave gift. The music is a typical series of fantasy songs that won’t be too noticeable. 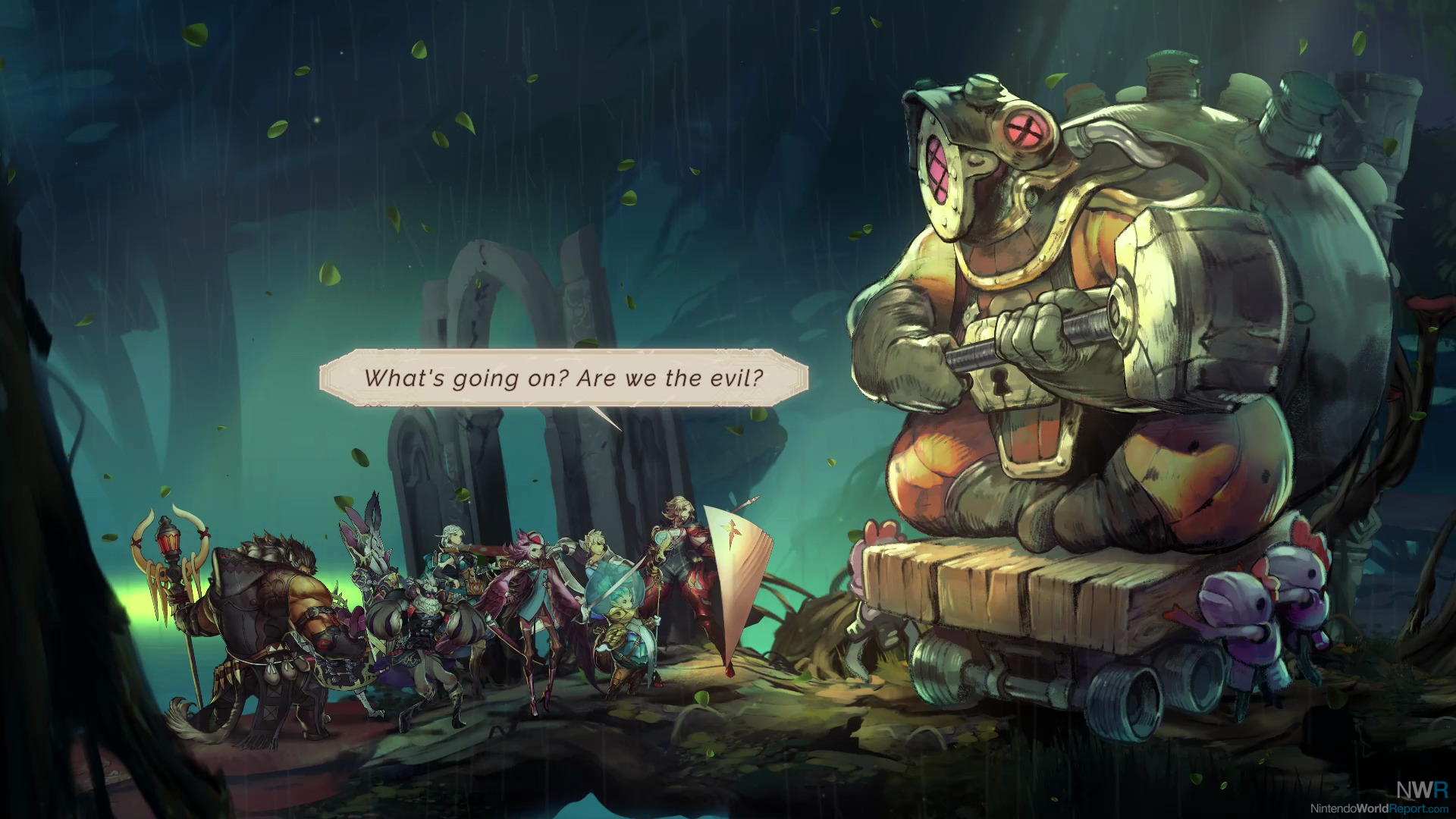 A rare moment of self-reflection for the demigod.

I didn’t actually click with Astria Ascending and I’m not sure why. Maybe it’s the inability to identify with characters who are functionally immortal, or the hackneyed story, or the loss of around 60 rounds of combat in a dungeon thanks to Omni-Stun. But I struggled to actually boot the game, which I haven’t had in a review in a while. If you’re ready to go all-in at Astria Ascending … well, you probably have already. If not, there are plenty of fish in the RPG sea on Switch and a few more marlins to come before the end of the year. You will be able to fill up.

Previous Call of Duty: Vanguard’s Latest Trailer gives us a closer look at the story
Next Xbox Unveils Xbox Series X Consoles in Celebration of the Nickelodeon All-Star Brawl