Steel Assault brings 90s-style arcade action to the Nintendo Switch in a world-class audiovisual package. It also brings difficulties that, despite some admirable efforts, can only be bought by genre enthusiasts. Steel Assault probably doesn’t have a broader appeal.

The plot is not that interesting or memorable. But for a side-view action game of this type, the story is ultimately not that important because it is largely unnecessary. How many arcade games have notable plots? You play as a whip-wielding soldier in a science fiction world. A world that looks great despite its post-apocalyptic status. 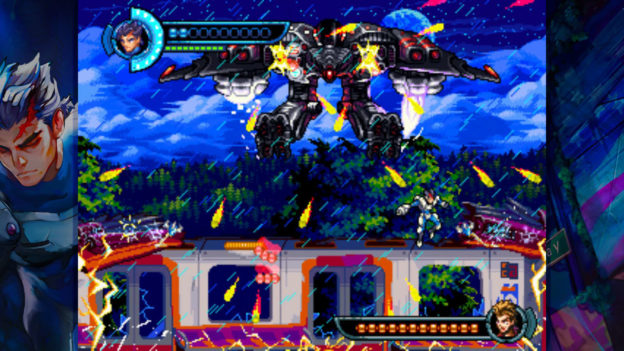 In truth, calling these visuals great could mean selling them. The presentation is, in a word, wonderful with a capital W! Elaborate pixel art and lush, vivid colors make me long to take a break from the action and stare at the screens for a spell. Describing certain scenes in a five-chapter game may be marginal spoiler territory, but everything is impressive from start to finish.

There was a bit of where I fell through the floor, but that was an exception rather than a rule where backgrounds were blended with foreground. The overall visual presentation contributes little to complaints. The music is not neglected either. The soundtrack is almost perfect for this type of game. You won’t get tired of these highly audible tracks even after listening to them repeatedly. 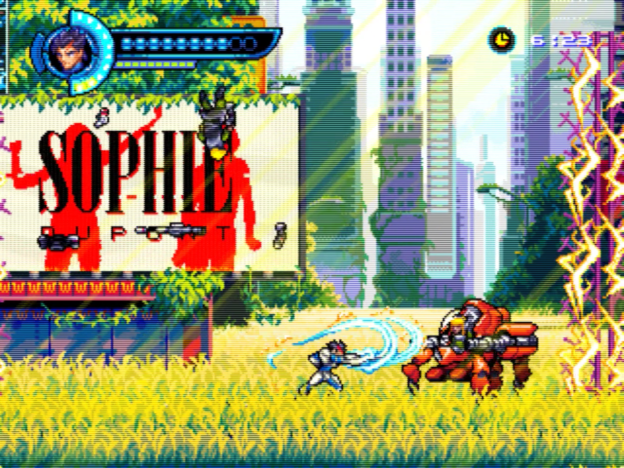 And listen to them over and over, you will. It quickly becomes clear that Zenovia Interactive had a high level of difficulty as a priority. I also suspect the difficulty options are based more on their experience, not on testers. Very Easy feels more light than normal for this genre, so it wasn’t long before I switched to it. At least until I’ve learned the levels.

There is an arcade mode that I suspect is a troll attempt by the developers. I don’t laugh though. A single life to beat the game ?! If this were actually in an arcade, you would be spending your entire quarter roll in minutes. Plus, the arcade manager who set these dip switches would likely end up in the can. Calling it an arcade conveys something it isn’t, so even as a gag it’s hard not to be disappointed. Perhaps it would be tastier if you could score with it in true arcade fashion, but unfortunately that option is missing. 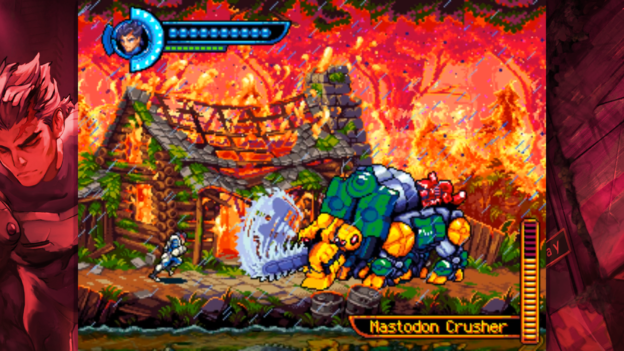 Speaking of the lack of options, the PR I received on this game mentioned that it “encourages players to keep trying to beat their own times”. Still, the game doesn’t seem to record any times. Here, too, an idea is submitted without follow-up; another disappointment.

Perhaps the biggest mistake is a lack of co-op! How many retro arcade classics has Zenovia Interactive played? This inexplicable absence makes Steel Assault seem less like an arcade homage and more like a rushed release. But that is not the case, because the representation shows far too much care. But it’s a game that finds its initial charm by sharing space with anger in a short period of time.

Coming back to compliments, Steel Assault has some variety that I appreciate like the zipline. Although I found it a bit awkward in the heat of the moment, it made for some clever platforms. There are also parts that you are in in vehicles, e.g. B. when driving a boat or hanging off an airplane. Mastering the different levels and conquering the difficulty is satisfactory. And of course the glutton within us will appeal for punishment. 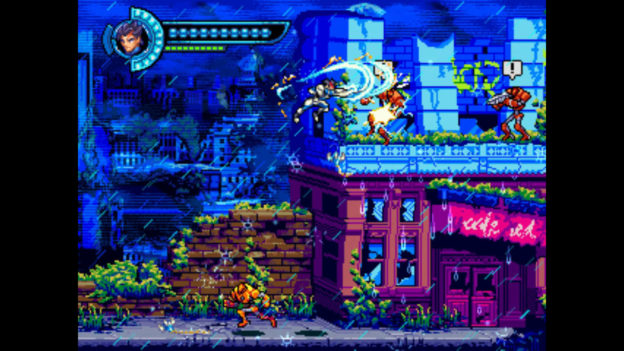 Difficulty and everything, this game can take a little over an hour to complete. The short length likely works in reducing potential frustrations. Without co-op, rating or timer, the replay value is below average. The introductory price of $ 14.99 can understandably make you hesitate, even if much (and I stress a lot) of the game is high quality.

Steel Assault nails its presentation, and I’m more than enough impressed that I’ll be keeping an eye on the next Zenovia Interactive release. However, it needs to take a closer look at yesterday’s retro arcade classics it is supposed to honor. Trading in the 1 life setup for co-op would be a smart start, as would adding scoring. This beautiful game may be better on offer, but it is an accomplished title that does many things with skill.