It seems that Tribute, the studio behind wonderful games like Panzer Paladin and Mercenary Kings, got into the publishing game. They teamed up with developer Zenovia Interactive to produce Steel Assault, a tough but mercifully short action platformer. While fun and resourceful, it also walks the line between difficult and frustrating.

You play as Taro Takahashi, a soldier armed with a mean energy whip and zip line to keep the evil General Magnus Pierce and his band cybernetic malcontents from taking over the world – which already seems to be in a post-apocalyptic age. Steel Assault looks and plays like an old 16-bit mascot platformer and personally reminded me of a GBA game. Tako Takahashi may not have the most complicated moveset in the world, but it does the job: he can double jump, slide for a few invincible frames, whip his energy whip in eight directions, and zipline (eight directions too). ). The zipline really sets Steel Assault apart: Taro will often use it to bridge gaps between platforms both horizontally and vertically. He can also attack while moving over the zipline.

The game moves very quickly and I found that I was able to beat Easy mode in under an hour – although some of that time repeated the final boss, which is surprisingly tricky. Taro has quite a large health bar, but health uptakes are extremely rare. Fortunately, the stages are pretty short and his health replenishes when he enters a new area. You’ll also have plenty of hand-to-hand combat, and your enemies are refreshingly diverse. However, there are times when the difficulty doesn’t come from enemies who are difficult to defeat on their own, but because there are so many enemies on the screen at the same time. 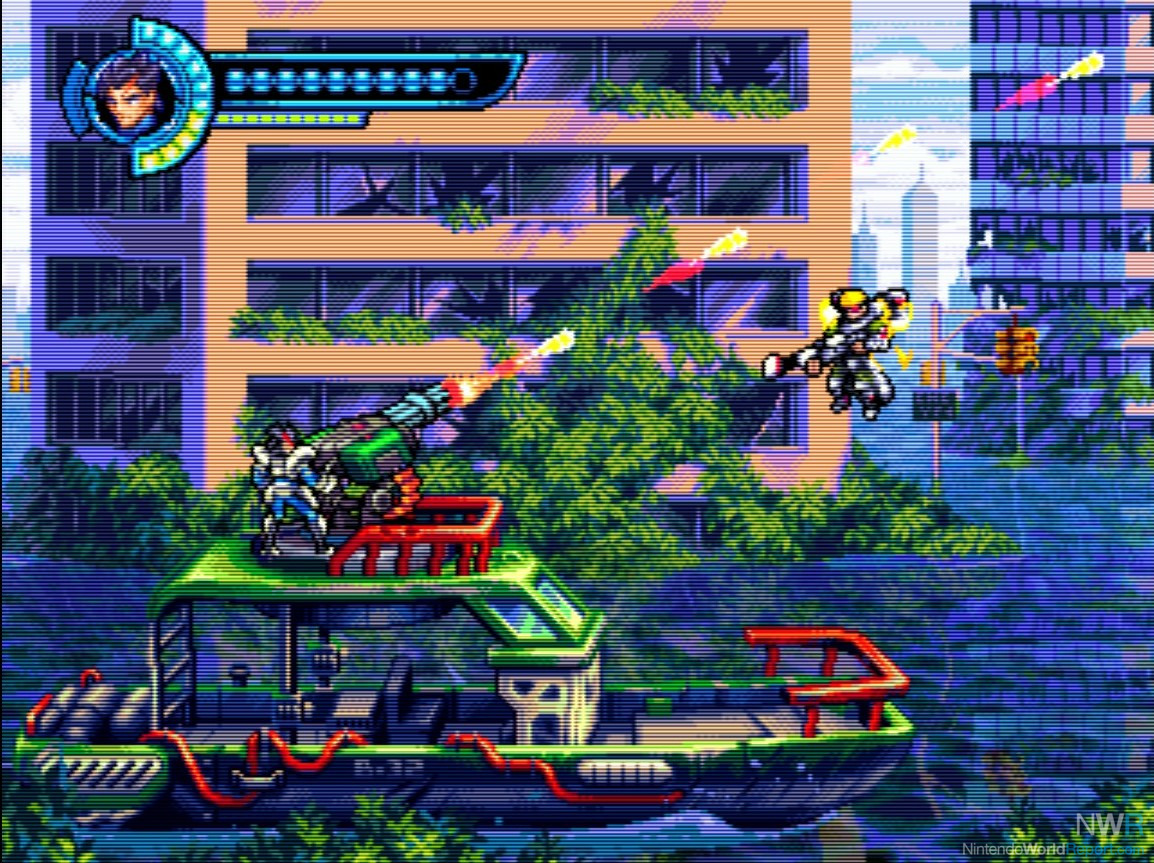 In some fun contra-like segments, Taro uses a turret to put down air strikes, including a pretty awesome robot monster. The boss fights are incredibly fun and require resourceful thinking on your part to avoid attacks. This zipline will come in handy! When you die – and you often will – Taro will continue at the beginning of the last area he entered, which is usually on the boss’s doorstep. Steel Assault offers multiple levels of difficulty, each an order of magnitude more difficult than the previous one.

Another big part of the game’s charm is its commitment to the 16-bit aesthetic. The game starts with a fun animated opening and each level has its own title card. Several toggle options include a CRT filter, the degree of CRT curvature, edge graphics, and what is known as a “bilinear filter” which adds an extra layer of noise to the screen that I found extremely pleasant. My biggest blow to the game has to do with the slide. In theory, taro is invincible when gliding. The problem here is twofold: first, the slide is ridiculously short and there is a short recovery period – you can’t really string slides together; and second, you have to press down and B to slide. It’s not a good combination in a feverish boss fight. I would have preferred if the slide had a dedicated key like A (which is not used for anything). The slide could also be a few frames longer. As it is, I’ve rarely used the slide effectively. That’s a shame, because an effective slide would have made the higher levels of difficulty much more bearable.

I feel like I say this on a lot of games, but I really enjoyed Steel Assault until I stopped doing it. It was really fun until then, and I have to praise Zenovia Interactive for their effective graphical filters which are a big part of the appeal.