I’ve noticed a lot more co-op games on the market since Overcooked; some grossly overcooked clones with a change in setting and others try something different. KeyWe feels somewhere in the middle to me, trying a few things without deviating too far from the formula. How is that?

KeyWe lets you (and maybe a friend) play as Jeff and Debra: two Kiwi postal workers. You will work together to complete tasks in 36 different levels, along with nine other “overtime” levels that are not required for level progression and that feel more like mini-games. As you play, you will be given cosmetic items (a good variety) that you can use to dress up your kiwifruit.

The main levels are divided into four different types, the concepts of which repeat themselves with twists and the level of difficulty increases as you progress. For example, one type involves typing messages. While it mostly works normally (as the first level of its kind), later buttons have occasionally swapped positions. I’m not a huge fan of this as I find it usually gives mixed results, and in the case of KeyWe, it’s mixed. Some levels have funny twists and turns and others just feel annoying.

While the graphics and sound are good enough here, the performance feels below average. There’s nothing here that I don’t think the Switch couldn’t handle, but it runs pretty choppy. The models of the Kiwi also tend to latch into objects relatively frequently. I’m usually good enough at character clipping (I’ve played enough old 3D games to get used to it). But it creates a lot of confusion here, especially when trying to navigate quickly. Characters also tend to get stuck in level geometry quite often, which leads to a lot of trouble.

However, playing on site with a friend was fun despite these issues. Layers make good use of collaboration. While some are annoying, those who are not a good time prove to be a good time. You will be graded from Bronze to Gold by the completion time of each level, and for heaven’s sake, gold is difficult to get! You and your buddy must perform at their best and work together to get gold.

I was pretty happy to see that online gaming was an option, but there are a lot of problems associated with it. While the levels themselves never lagged, the inputs were noticeably delayed. In a game like this, it’s really frustrating. Some levels were not played properly, which led to numerous softlocks. While the vast majority of the game is playable online, I had to stop and switch to single player to complete a couple of levels that kept softlocking so we could advance. Patches are required.

Playing in single player worked better than I expected. Level timers are much more forgiving and there are two control options available for using both Kiwis. It’s not bad, but it’s not as good as playing with a friend locally, and I would struggle to recommend the game if you plan on playing it on your own.

Overall, I liked KeyWe, but it has some issues. The levels are mixed and there are some problems controlling the kiwis. I do not recommend buying the game for online play. But if you have someone to play with locally, you could be having a decent good time. 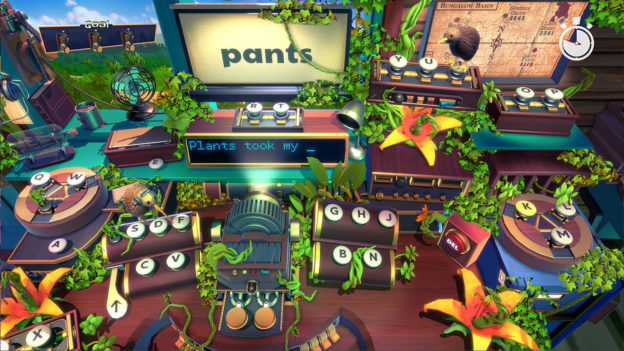